Passive Recording
Passive Recording means that the call recorder is not involved (as a participant) in the call, but only receives copies of call data to create recordings. SIP / VoIP data includes an audio stream (if present). During a call, VoIP data is sent between the PBX and the VoIP provider. This VoIP data is copied to the call recorder by port mirroring (also known as SPAN). In a Local Area Network, this is done by a network switch. The picture below shows External Passive Recording, also called recording on the trunk. External means: not in between the PBX and the phones. Internal calls cannot be recorded with external passive recording, but there are other solutions available for that. 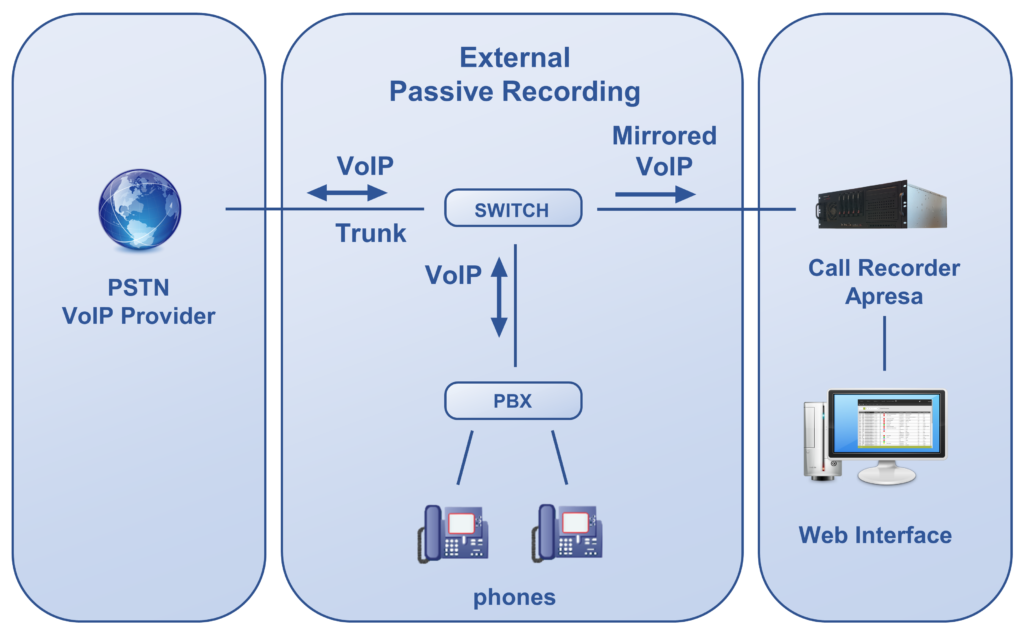 CSTA
Passive recording can be improved by receiving additional data from the PBX about the call (call signaling data). This is done, for example, using CSTA communication between the PBX and Apresa. The PBX needs to be configured for this. The picture below shows CSTA External Passive Recording.

Active Recording
In some cases Apresa can also use Active Recording. The Apresa takes part in a call (like a third party) to create a recording. This works with an automated conference call setup in the PBX. Active recording is especially useful in situations where port-mirroring is not easy or not possible. Active recording is available for, among others, Unify OpenScape 3000, OpenScape 4000 and OpenScape Voice, Avaya Aura (DMCC protocol), Cisco Unified Communications Manager (CUCM), and innovaphone.

The picture below shows Active Recording in general. 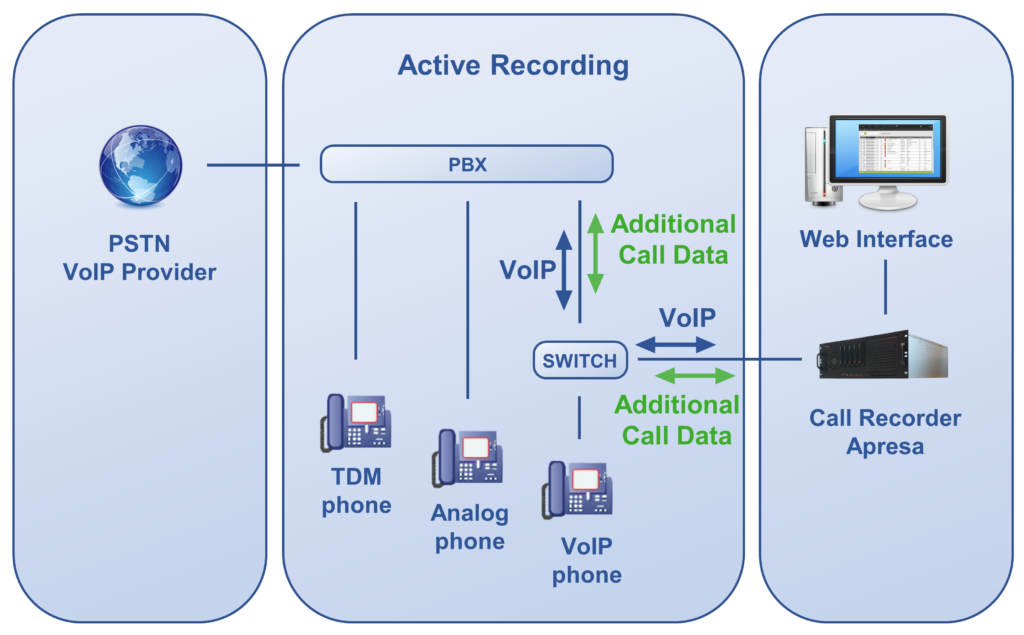 SIPREC
The Apresa directly communicates with the device that is configured to share the SIPREC data. This can be the PBX, a multi-line controller (MLC) or a session border controller (SBC). The picture below shows the SIPREC solution for Unify OpenScape Xpert. 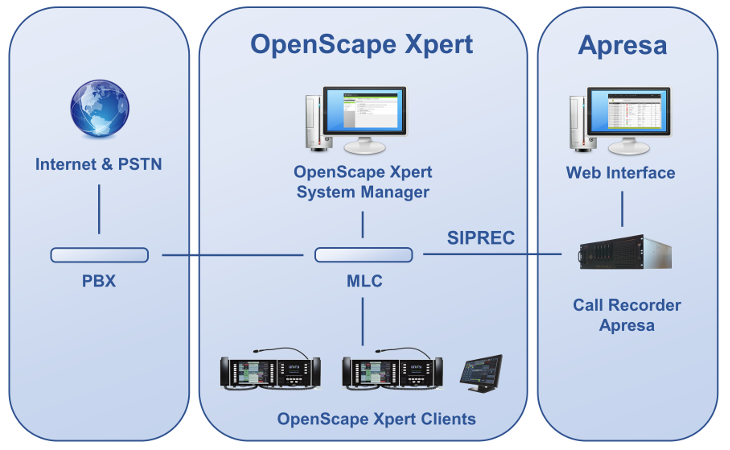 Built-in-bridge
Apresa records calls from the Cisco CUCM using the built in bridge recording functionality. The phones that are to be recorded use an automatic SIP call to the Apresa. The VoIP Service of Apresa accepts and records these SIP calls. The JTAPI connection is for receiving additional data about the calls. This is another example of Active Recording. 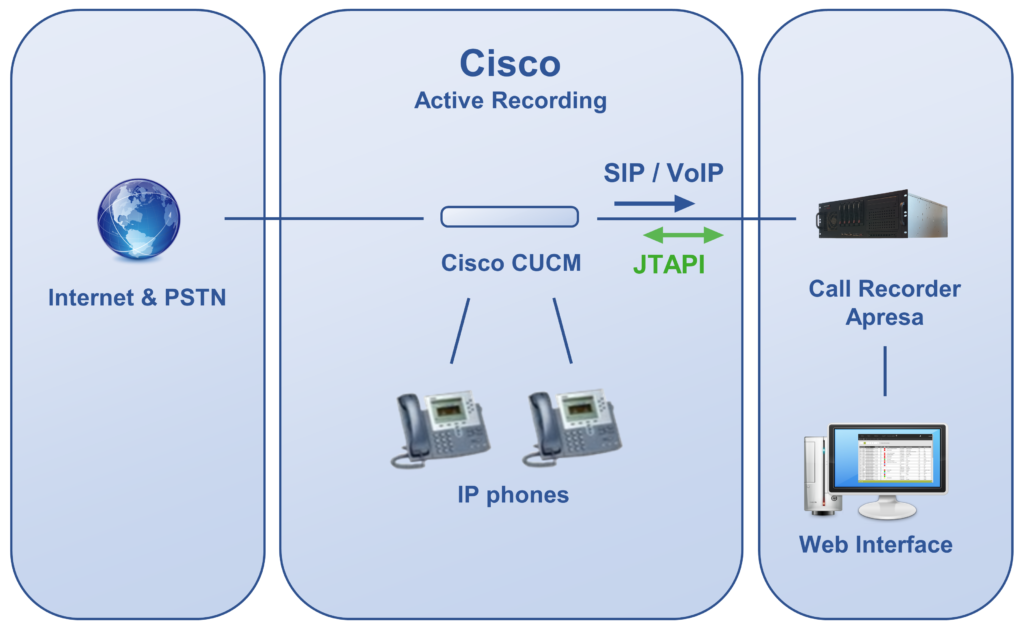 Microsoft Teams
Apresa records video meetings, phone calls and chat from Microsoft Teams. Screen sharing can be recorded as well. The recordings are created by a Vidicode Recording Bot running in the Microsoft cloud environment (Azure). Many useful settings can be configured in the Vidicode Bot, for example to enable “Recording on Demand” for a specific Microsoft Teams Client.

In the Microsoft Teams interface, a client can stop a recording, delete a recording, insert a silence for privacy reasons, and add notes. These notes will be stored in Apresa along with the recording. During a video meeting there is an option to blank the screen and silence the audio, for parts of the meeting that shouldn’t be included in the recording. 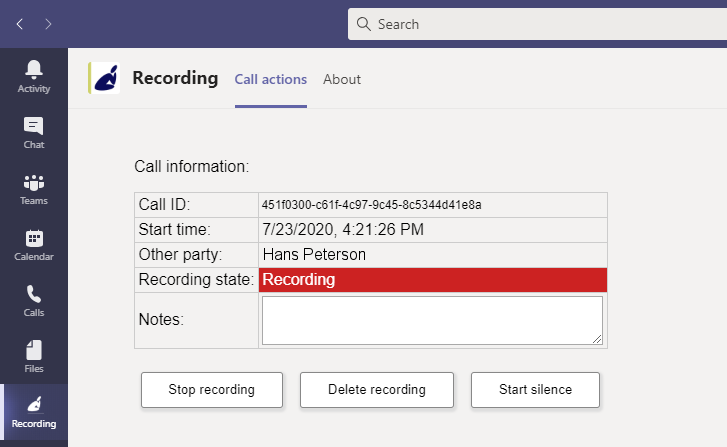 The Vidicode Bot in Azure will send the recordings to the Apresa, where they are stored. 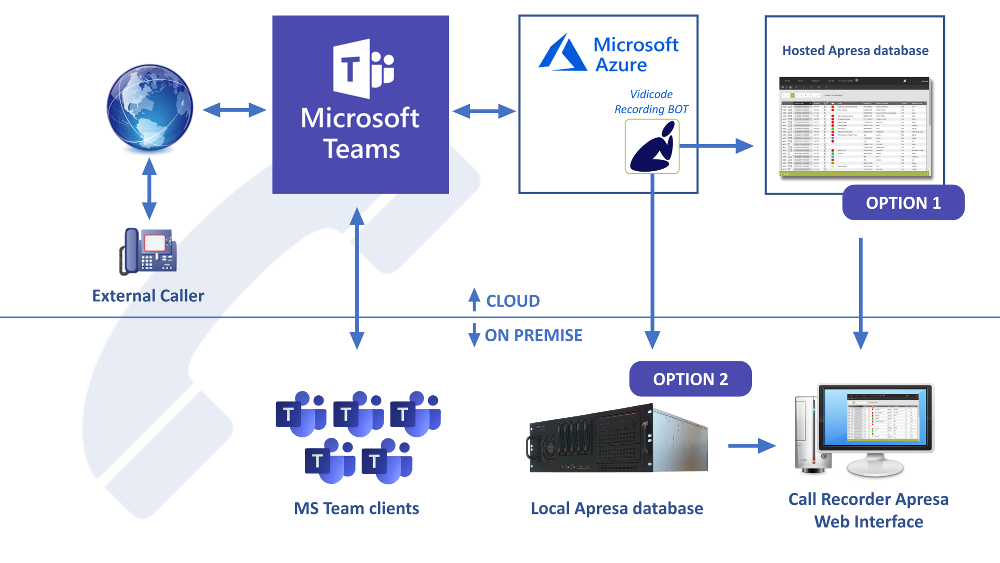 One single Vidicode Bot can upload to more than one Apresa recorder. An Apresa recorder can host multiple tenants. Authorized users access the recordings in the Apresa web interface. Call recorder Apresa runs in the cloud or on premise.

For more information, call us at: