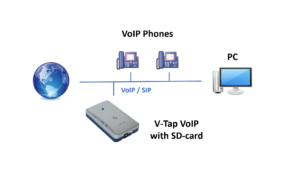 Which recorder is suited for a specific situation will have to be determined. It will depend on criteria like the number of calls you want to record simultaneously. It may also depend on the importance of the recordings and where you want to store the data:

• The Call Recorder VoIP stores the recorded calls directly on a PC and thus offers a cost efficient solution for one to four channels.

• The V-Tap VoIP stores the recordings on its own SD-card. This data can be received by the V-Archive PC software.

• The Call Recorder APRESA offers VoIP call recording for any solution starting from a few lines to large enterprise or hosted recording applications. APRESA is a recording system that can not only record VoIP, but can also be used as a hybrid recording system. RAID 10 disk configuration and redundant power supply are optional.

Passive and Active Recording
Usually VoIP recording is done via a passive connection using port mirroring (also called port SPAN). This method is ideal for most recording solutions because it is normally easy to implement and can not interfere with any ongoing traffic.

A second way of doing VoIP call recording is to use active recording. This method interacts with the PBX. The idea is that the recorder becomes a third party in ongoing communication allowing it to record much more focussed. This method is ideal for larger environments that often have multiple sites.